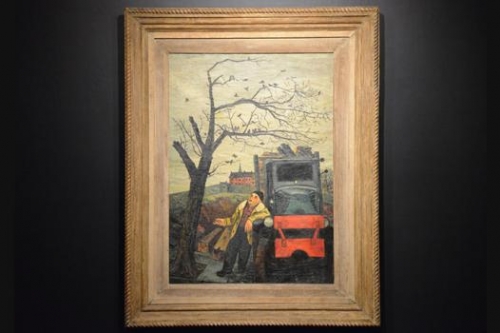 On the 300 block at Caldwell Gallery Hudson, the work on display, and for sale, is in a different league. Jay Caldwell’s gallery would be at home on 57th Street, with its revolving displays of late Nineteenth to mid-Twentieth Century works by obscure masters, not to mention luxurious seating in the upstairs space. The current show (titled 4 x 6) of four works each by six minor mid-century virtuosos is genuinely appealing, in particular the eccentric but folksy portraits by social realist Gregorio Prestopino, and a series of lovely abstracts by Carl Holty, on whom Hans Hofmann’s influence looms large. (Through December 22)

Downstairs at Caldwell, you’ll find a treasure trove of other pieces, most dramatically, a spectacular 1869 family portrait by the prolific Irish genre painter George O’Neill. And if you love Monet (who doesn’t?) but can’t afford one (not even one percent of the one percent can), you might consider Theodore Earl Butler’s “Farm Orchard in Winter, Giverny” at a mere $35,000 (Butler was married to Monet’s stepdaughter).