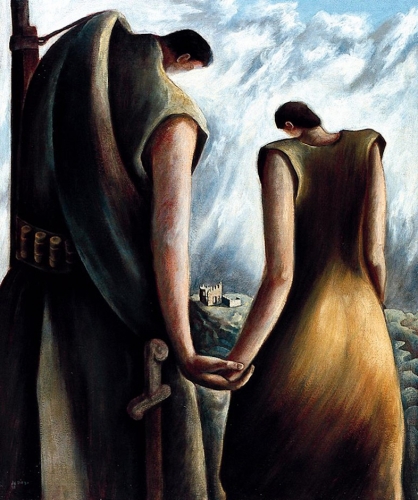 Caldwell Gallery Hudson is pleased to present an exhibit of 15 works by Julio de Diego (1900-1979). Born in Spain, de Diego came to America in 1924, settling in Chicago. The artist began exhibiting regularly at the Art Institute of Chicago, culminating in a one-man show in 1935. He continued to travel and exhibit extensively throughout the 30's and 40's, with much of his interest and art created in response to war, strife, and the human condition.

In Homage to the Spanish Republic (1938) de Diego makes a poignant statement about the cost of the Spanish Civil War.Blue Print of the Future (1943) from the artist's reconstruction series, was reproduced in an article about de Diego in a 1946 issue of Life magazine. There are also five paintings from his "Atomic Series", which he painted in response to both the fear and fascination unleashed by the dawn of the atomic age. Utilizing a technique of oil and glazes on tempera, the appearance of these works is not unsimilar to bone china. The artist commented that in one of these paintings the figures fighting had lost their flesh, yet they still kept on waging war.